In the last century, Belleville lost 160 sons while in service to our country. This collection, gathered from newspaper clippings and other sources collects what we know about these young men in an effort that their sacrifice not be forgotten.

The first edition of this book resulted in several town streets being named for our local heroes and the names of the fallen being etched into the war memorial on Union Avenue.

Belleville Sons honored by memorial signs on the streets where they lived.

In June 2016, Belleville Township Council passed a resolution to dedicate certain streets in town to servicemen who hailed from the municipality. The goal is to honor 160 Belleville sons who died while in service within the next year.

Died on the 4th of July

Died on the Fourth of July

This is a book about sacrifice, love and remembrance -- the sacrifice of Americans who died in Vietnam on the Fourth of July, the love of their friends and family, and the remembrances that honor these heroes after all these years.

As our Nation marks the 50th anniversary of the Vietnam conflict, it's fitting to look beyond the debate over that controversial war and honor the men who bravely did what their country asked of them. The stories told here are as much about the fabric of 1960s America as they are about the men who served and died.

Every year on the Fourth of July, while most Americans are grilling hotdogs, watching baseball and enjoying fireworks, relatives and friends of 167 American heroes pause to remember a loved one who died serving our country in Vietnam on our Nation’s birthday.

Belleville son Carl Mickens is included in this volume.

Private Hyland KIA while fighting the enemy along the Kum River, South Korea on July 20, 1950.

Joseph Burlazzi was killed in Tunisia in March 1943.

Belleville in the Civil War 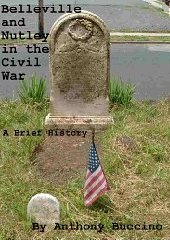 Copyright © 2005-2018 by Anthony Buccino, all rights reserved. Content may not be used for commercial purposes without written permission.